In 1908 a group of Aspendale residents petitioned the Minister of Education for the building of a State School in Aspendale. After a lengthy process, the first classes were held in the new rooms of State School No 3790, Aspendale, in 1913. The school was not officially opened until 1924, with Sir Alexander Peacock, Minister for Education officiating. In 1914 the school had a population of ninety.

By 1920 the enrolment was 223 (more than double the school’s original enrolment), however the school was only built for one hundred and fifty students. Overcrowding then became an issue with children sitting three to a desk. By 1921 classes were being held in the local Methodist Church hall to held ease the space issue. In 1912 the area also became known as Edithvale and the school name was change to Edithvale Primary School.

In 1938 articles appeared in The Sun and The Herald noting the concerns with the overcrowding of classrooms at Edithvale Primary School and the issue continues into the 1940’s. 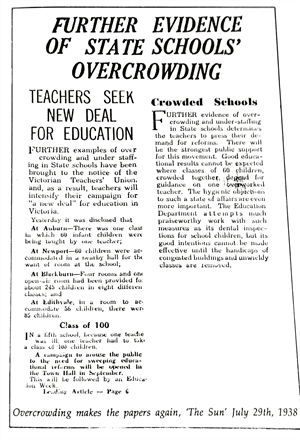 In 1940 the school was receiving some much needed building maintenance. The maintenance didn’t quite go to plan, when a painter’s lamp ignited a bird’s nest and causing a fire that completely destroyed the main school building and a detached classroom. Forty fireman from the local area attending the blaze. The following year classes were relocated to local halls and churches. In 1942 a Gala Day was held to mark the re-opening of the school in a new brick building. During the war years children and staff were actively supporting the War Relief Fund.

In 1947 the enrolment was at four hundred and twenty-five with an average of fifty-three children per room, prompting calls for more accommodation again!

The Education Department requested a maypole be purchased by the school to train a dance team who actually performed for Queen Elizabeth II and Prince Phillip at the MCG during the Royal Tour of 1954.

The “Post War Baby Boom” continued to strain accommodation with an enrolment in 1954 of five hundred and sixty children, staffed by a Head Teacher and twelve assistants. The 1960s saw continued development of buildings in the school and a staffroom provided. In 1969 enrolments reached seven hundred and fifty six students.

During the last twenty years a number of innovative curriculum initiatives and grounds improvement programs have taken place and continue to do so. 1988 saw the school’s seventy-fifth year with a special “Bi-Centenary Opening Day” on 26 February to mark the start of the school’s celebrations for the Bicentenary and the school’s Diamond Jubilee.

Since 1913 the school has evolved with a good reputation for providing the best facilities and extensive opportunities to enable all children to reach their full potential. This has only been possible because of a long history of teacher and parents working together to ensure that Edithvale Primary School is a school of which to be proud.From 1999 to 2002 the school underwent a major capitol works project, having approximately two million dollars spent on upgrading the administration block, refurbishment and addition of new classrooms.

2013 was our Centenary year which was celebrated with an exciting and very successful event on Saturday 25 May.